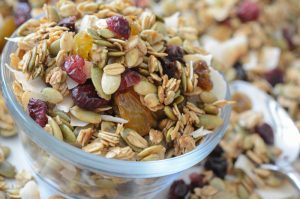 Homemade granola couldn't be easier than with this delicious healthy recipe. This breakfast and snack food can also be used as a topping for various pastries and desserts.

We like to store granola in a large mason jar. We found that storing for several days in a ziplock bag will not keep the granola at its peak of freshness.

Recipe by Allergy Chefs at https://www.yourallergychefs.com/toasted-coconut-and-pumpkin-seed-granola/